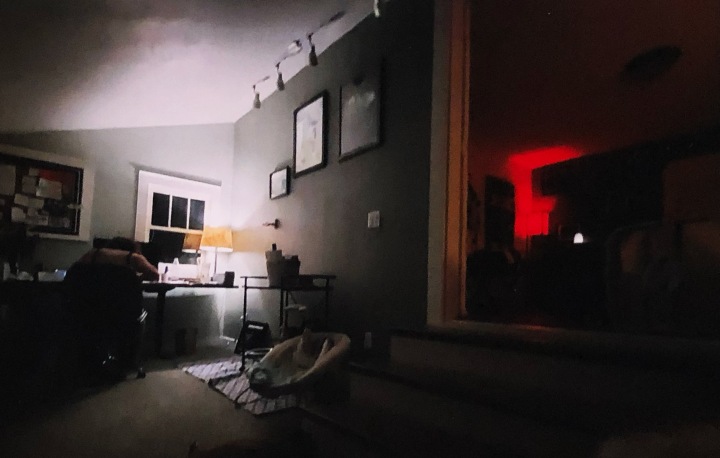 Several weeks ago, my husband snapped a photo of our family’s new nightly feeding routine. The scene is set around 3:00 am, the dead of night, and my back is turned toward the camera. I lean over to adjust the breast pump. In the frame, the half of the bedroom we fashioned as a diaper changing station and nursing oasis is dimly lit by a single, soft white bulb. My husband holds our infant son, Charlie, as he greedily suckles a bottle, the contents of which were donated by some other mother with more than enough breastmilk to spare. I sit bathed in white light and attempt to increase my own supply, as the rest of the bedroom glows red. The night light casts bloody shadows across the wall. We are exhausted.

Prior to parenthood, I knew the breadth of change that a newborn would bring: sleepless nights, ringing ears, tested patience. I watched other mothers navigate the early weeks and months, and I thought, “I am up to this challenge.” What I didn’t anticipate, however, was the emotional rawness of the experience. I thought perhaps Charlie’s birth would be a clean slate, a new beginning. His would be a fresh life as yet untouched by the secrets and pain of his ancestors’ trauma. And, in some way, I thought my hopeful focus on the future would seal the jar on my own sadness and loss.

Instead, the experience of bringing a new child into the world was not isolated. I could not wall it off from the past year’s events. Charlie continually reminded me of the DNA discovery–a biological father I would never meet and my mother’s half truths and omissions. I stared into Charlie’s tiny face and big, expressive eyes, and I saw my own eyes reflected. Would I have been so upright if his financial stability and childhood were on the line? If I knew the truth would push him into the same cycle of broken relationships of the family’s previous generations, would I still swear allegiance to it?

I began to see the threads of connection between my own parental experience and my parents’ messy lives. Even though my biological father was no longer alive, his DNA lived on in the tiny human I held in my hands. I had yet to discover which traits of his Charlie carried, and the truth was that I might never be able to distinguish them from the genetic gifts of my maternal line. Would Charlie love dogs and travel? Would he wield a charismatic directness in his older years? Would his almond eyes remain as evidence of Japanese ancestry even as his hair turned my mother’s shade of strawberry blonde?

There was no perfect answer to these complicated questions–no new life blooming except through the roots of the old. Just like the photograph, the legacy of loss glowed red alongside the hope of an unmarred future. There was no separating them. New parenthood taught me that living fully means embracing the reality of what came before.

What the camera portrayed and what my son’s face reflected was this: death is just the beginning of hope.

Scratch the battle rope and weighted workout vest—I’ve got an 80 pound dog and a 12 pound baby.
Hey Ma, the extra credit paid off! Look who took home 🥇 in the conspiracy theory cocktail competition!
Hope and a future.
Yaqi Wu at #shiftinggears was a delight!
Will Not the Judge of the Earth Do Justice? by Jessica Jacobs
Sometimes he’s a cutie, sometimes he’s a lemon. 🍊 🍋 ♥️
%d bloggers like this: